“Life is not a problem to be solved, but a reality to be experienced”

The Soren Kierkegaard room at the Copenhagen City Museum is one I, like many before me have flocked to, to see the relics of “The Copenhagener”. The man who’s philosophical thought is a prerequisite for Existentialism. Kierkegaard was deeply affected and inspired by Copenhagen, “the beloved royal city” as he often called it. His life overlapped with Keats and much like Keats, interest in his work grew greatly after his death, spreading around the world.

“What is a poet? An unhappy person who conceals profound anguish in his heart but whose lips are so formed that as sighs and cries pass over them they sound like beautiful music.”

The small darkened room at the Copenhagen City Museum, dedicated to Kierkegaard shows pilgrims a glimpse of his life and existence in Copenhagen.

Kierkegaard has been called a philosopher, a theologian, the Father of Existentialism, both atheistic and theistic variations, a literary critic, a social theorist, a humorist, a psychologist, and a poet.

Two of his influential ideas are “subjectivity”, and the notion popularly referred to as “leap of faith”. His conception of how an individual would believe in God or how a person would act in love.

Kierkegaard, like Keats was also deeply affected by a powerful love affair.

Kierkegaard and Regine Olsen met on 8 May 1837 and were instantly attracted to each other. On 8 September 1840, Kierkegaard formally proposed, but he soon felt disillusioned about his prospects. After thirteen intense and stormy months he broke off the engagement on 11 August 1841, though it is generally believed that the two were deeply in love. He felt in a religious sense, already in childhood he had been betrothed to God and so he could not marry her. This broken love affair left its mark on him and he felt the affects of it for the rest of his life.

Shown is the engagement ring Kierkegaard gave to Olsen. When he broke the engagement Olsen returned the ring to him and following a Danish tradition he had the rings stones reset into a cross, which he wore for the rest of his life. 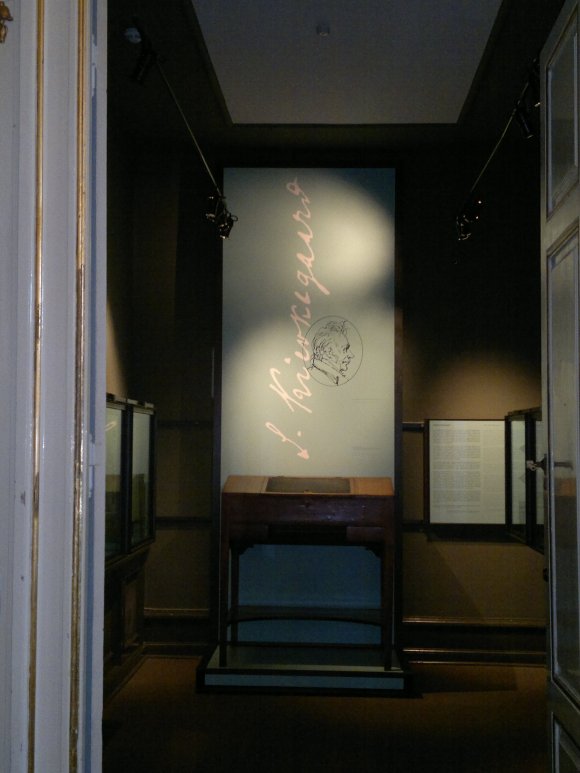 The exhibition states that most of Kierkegaard’s personal positions were scattered to the winds, but saved for visitors to enjoy are items such as his writing desk, pipe and the keys are his house in Copenhagen. 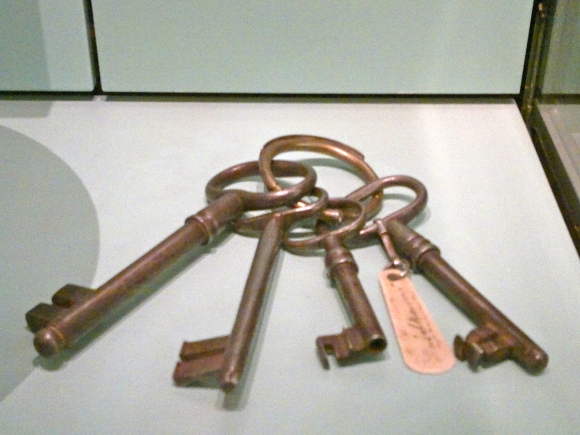 Some thing I was pleased to discover I share with the philosopher was a love of odd crockery Kierkegaard owned a larger number of odd cups and liked to let his guests chose which cup they would like to drink from. 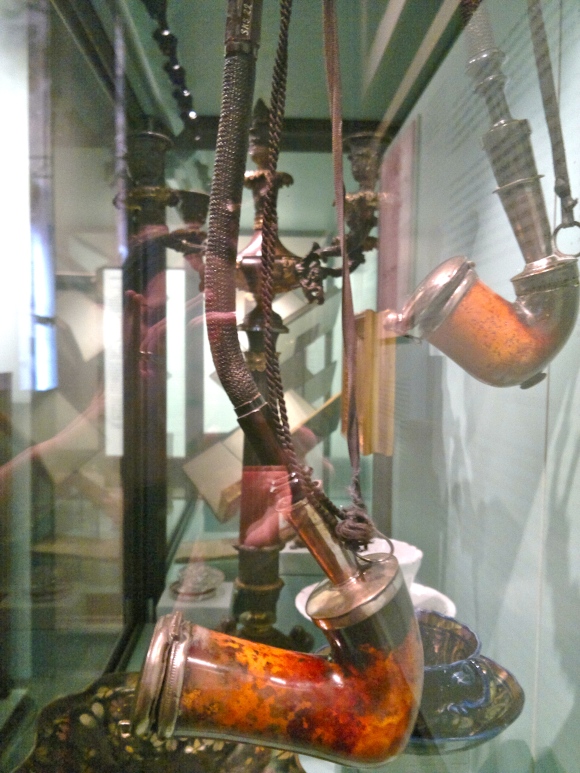 I had forgotten this fact, but as I sit and type this, five months later, I am surround by the uncleaned away remnants of a party, as I don’t have many glasses and not two that match, guest were invited to chose a random and generally unsuitable vessel from my 40s drinks cabinet, which I lit up with flashing bike lights. I am pleased to discover a little of his essence has rubbed off on me.

Perhaps this was because of the time I spent pondering his belongings in the Copenhagen City Museum or perhaps it was the miles I clocked up searching for the Copenhagen of kiekegaard’s day, the crooked streets, where carriages rarely went, which he himself loved to walk. The affects of which I felt each evening… 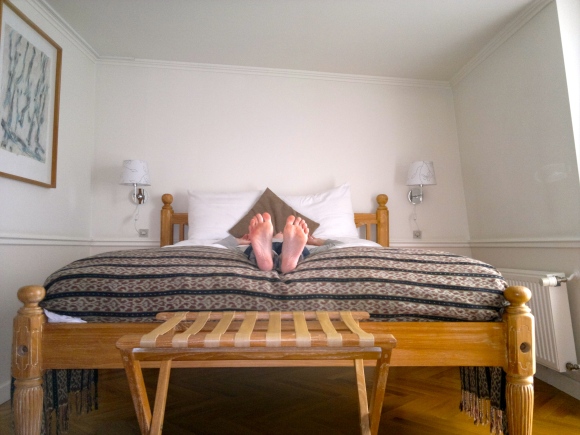 One thing that I know to be true is that the more you read Kierkegaard’s words, the more you fall in love with a man who was enormously insightful beyond his on time. I really need to stop crushing on dead people…

I have worked with Museums across the UK for the last ten years making costumes for exhibitions on everything from The Titanic to Tyrannosaurs. I have Run workshops and lectures on costume both nationally and internationally, my work has featured in exhibitions, films and theatre productions both nationally and internationally. In 2011 I curated The Needle is always at hand, an exhibition of dress based on Fanny Brawne's life while she lived at Keats House.
View all posts by lholmes4keats →
This entry was posted in Uncategorized and tagged broken engagement, Copenhagen, Copenhagen city Museum, dead crushes, engagment, Existentialism, John Keats, Love, Museum, odd cups, party, Poet, Poetry, Regine Olsen, Soren Kiekegaard, walking, writing. Bookmark the permalink.